About "Sweat defense" for OLD SPICE by Rick & Mario

Rick & Mario with their independent animation studio Red Knuckles teams up with Wieden+Kennedy Portland for an energetic spot starring the Tennessee Titans icon.
In Old Spice’s latest spot there’s no better ambassador for high-energy performance than Tennessee Titans running back Derrick Henry - whose relentless energy breaks him out of the boundaries of EA Sports’ NFL Madden 20-style game. Rick and Mario were brought on board to create the stylised world, amplifying Old Spice’s upbeat attitude with world-class animation and giving viewers an insight into the future of Madden games.

Inspired by Derrick Henry’s relentless drive and determination on the field, the commercial begins in the video game many would recognise - with an Old Spice twist. We watch as Henry charges across the field and out of the stadium, leaving his opposing players clinging on for dear life as he blasts out of the Madden-style world and through the city - ending up on a treadmill to continue his exercise. Despite his unbeatable energy, however, Old Spice keeps him smelling fresh. 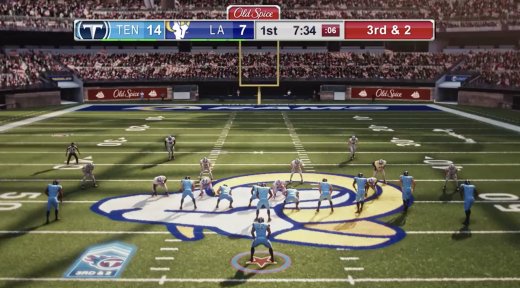